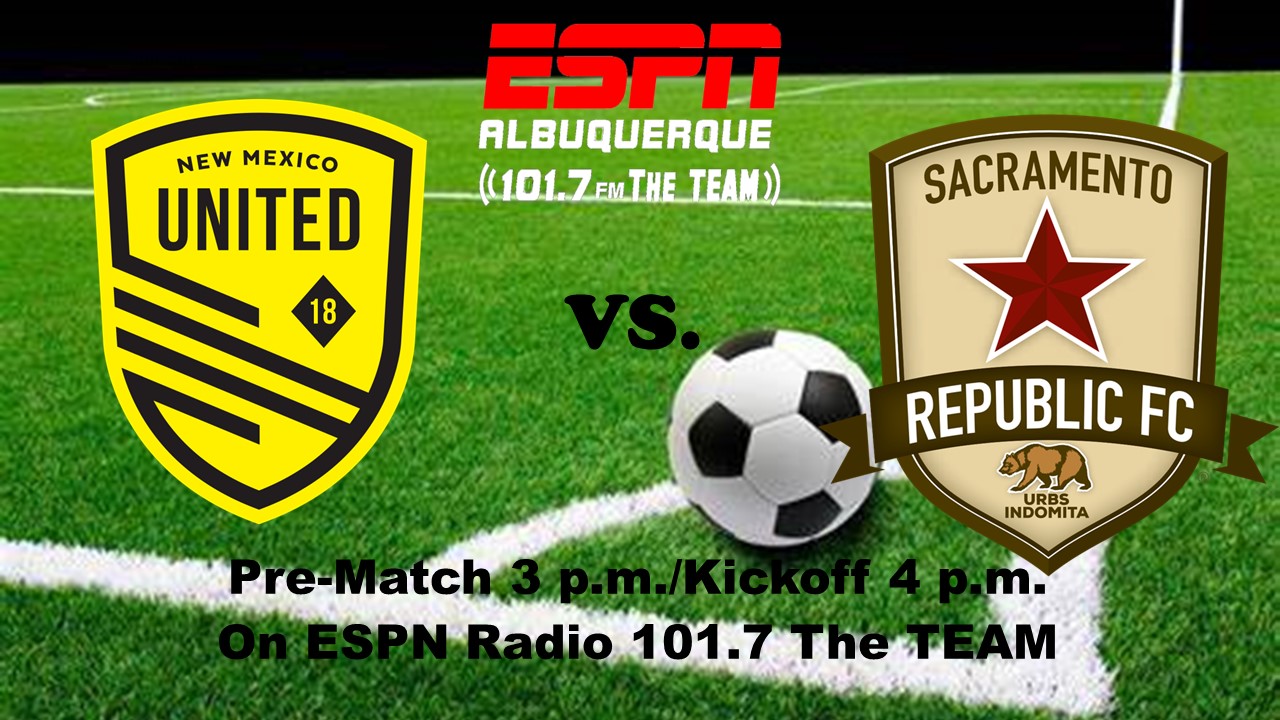 For the third time in club history, New Mexico United has hit a streak of seven matches unbeaten. They accomplished that feat once already this season and again back at the start of the inaugural season. Each of those runs resulted in a minimum of 13 points being added to the season tally, the best of those three streaks gave United 17 points earlier this season.

This week United is faced with a pair of home matches against opponents who are looking to solidify their own grasps on playoff positions. Both Sacramento Republic FC and The Miami FC visit The Lab as the season gets into the home stretch. United and Sacramento haven’t faced each other in Albuquerque since the early stages of the 2019 season when Republic held United goalless in a three-goal victory for the visitors. Back in 2022, Head Coach Mark Briggs has his side in the hunt for the US Open Cup trophy and squarely in the middle of the playoff hunt in the Western Conference. Even with the success they’ve had so far this season, Briggs hasn’t been content to sit back and just let things ride. Republic just signed a familiar name to their roster, forward Deshorn Brown, who United supporters should be familiar with. Briggs has done well to balance the Open Cup schedule with league play and has managed the expectations of both competitions.

While Sacramento doesn’t have the most impressive goal differential in the league, the club plays consistent football and hasn’t really shown a deficiency anywhere on the pitch. The strength of the club has been the play of their fowards. Sacramento has been blessed with an abundance of talent across the front and they’ve shown the ability to adapt to what opponents want to play against them. Against SKC in the Open Cup, Republic put Keko up top in an unbalanced approach then at the weekend played Emil Cuello out wide to try and break the press from Charleston. Against United, Briggs is more likely to have his men play in the former style or try to play through the middle, which has had success against United due to the lack of pace at centreback when Kalen Ryden starts.

Rodrigo Lopez – Lopez has been a force to be reckoned with in the Western Conference this year. It seems like every week, his name is being called repeatedly in Sacramento’s matches, and for good reason. He’s an improved version of Sergio Rivas and is dominant going forward. He leads Republic in chances created, assists, and is second in shots and goals. Shutting down Lopez will greatly increase United’s chances of picking up three points, but even then United will have other threats to worry about.

United enters the final fourteen matches of the season in a bit of a conundrum. They’ve picked up results in each of the past seven matches with three wins and four draws, but they’re still lacking consistency. The match against NYRB II on Sunday was another piece of evidence to support that. The first half was a dominant display from the Black & Yellow, but the second half was anything but. It took the return of Amando Moreno and a last-minute goal to secure the three points on the road against what is easily the worst side in the USL Championship. Sacramento is a completely different kind of club and can punish United for inconsistent play.

With a chance for six points at home and the number of matches remaining dwindling, United has to take advantage of the home crowd at The Lab. An early goal and a persistent attack would get the home crowd involved and improve the momentum for the club. That push forward needs to come from the midfield and Zach Prince needs someone to step up and be the engine for United. The club does have Harry Swartz and Daniel Bruce pushing the wings, but through the middle, the creativity is still lacking at times due to the absence of Chris Wehan and Sergio Rivas. Even Cristian Nava has missed time, and the spark through those areas has been lacking despite the promise shown from seven consecutive results. If United can force Sacramento to play on their heels, then the control and pace of the match will favor the hosts on Wednesday night.

Chris Wehan – Wehan returned from an injury last weekend and drained a beauty of a free kick from distance and showed how impactful he can be in a match. After getting a rest over the weekend, Wehan may be called upon once again against Republic to help drive the play through the center of the pitch. Look for him to drop deeper to try and pick up the ball with space to turn or play a through ball into the feet of the forwards to get them involved early and often.

Wednesday night’s match at The Lab is scheduled to kickoff at 7:00 p.m. (MT). The match will be streamed live for domestic viewers on ESPN+ and on YouTube for those watching internationally. Locally the match will also be broadcast on ESPN Radio 101.7 The TEAM, via, The TEAM app, and The TEAM website.