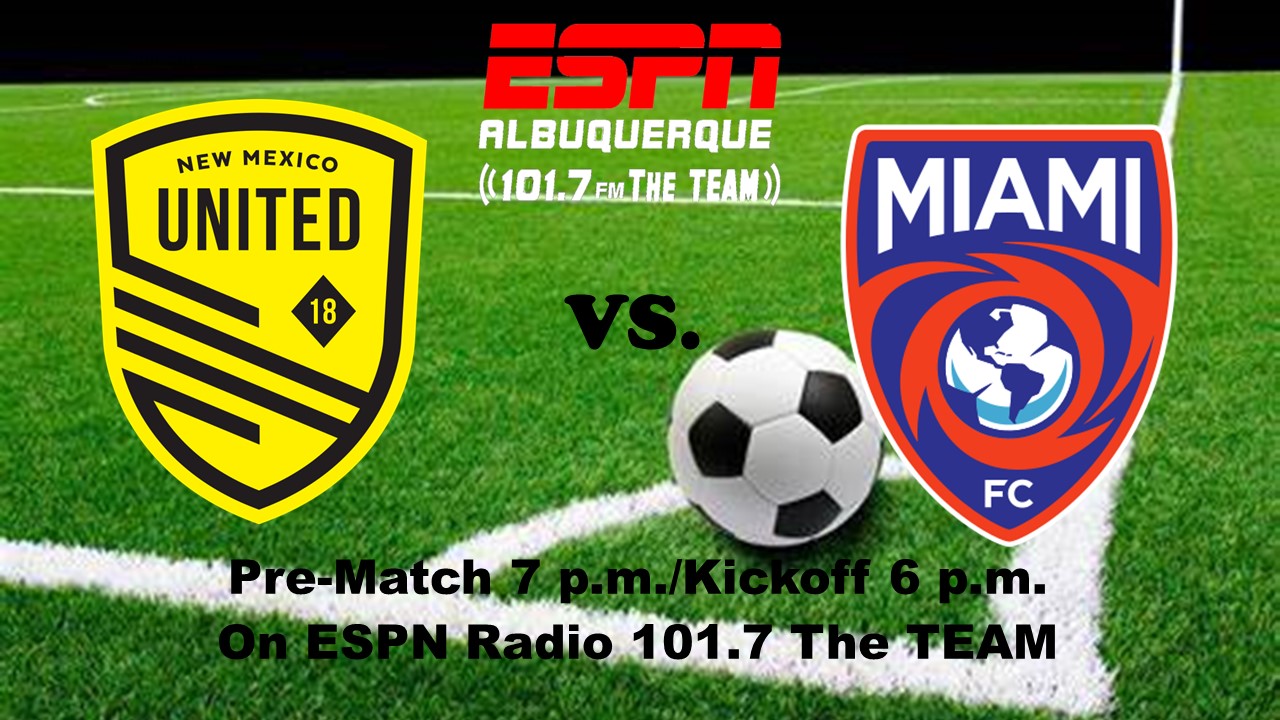 Consistently inconsistent is the best way to New Mexico United’s season. Twice this season they’ve gone on seven-match unbeaten runs and toe-to-toe with some of the best clubs in the league. Other times, they outplay their opponents only to have periods where they seem to shut off and let themselves get beaten. Twelve matches remain in the regular season and United has to figure it out.

After United squandered a chance to pick up three points against Sacramento Republic FC on Wednesday, The Miami FC has to feel better about their chances on Saturday. They’re already heading into the weekend having won three out of their last five and are fighting for their playoff lives. While the Eastern Conference likely won’t have as many surprises over the final few months of the regular season, there’s always a chance for Miami to fall out or drop points to a club below them such as FC Tulsa.

While The Miami FC isn’t an offensive juggernaut, they’ve been solid at the back. They have relied heavily on the presence of goalkeeper Connor Sparrow. Through eighteen appearances Sparrow has racked up eight clean sheets on the season so far. If Miami had a better record, Sparrow would easily be in the discussion for keeper of the year. But, the lack of goalscoring from his compatriots has held them down all season long.

Romeo Parkes – Former Sligo Rover and New Mexico United player Romeo Parkes has found a new home with The Miami FC for the 2022 season. While he still hasn’t quite lived up to the hype that was expected of him at both United and Miami, Parkes has still been a presence up top for the South Florida club. With four goals in nineteen appearances, Parkes is someone that can get on the scoresheet if he’s given the opportunity to do so.

Twenty minutes nearly cost United the match against New York Red Bulls II. Five minutes did cost United the match against Sacramento Republic. For whatever reason, United puts themselves behind the eight ball match after match. Five times the club has dropped points from a winning position at home, costing them eleven points this season. Despite playing well for much of those matches, it wasn’t good enough and Zach Prince and his men know it.

As much as Prince would like to keep emotion out of his decisions and keep his club level-headed on the pitch, perhaps showing more emotion is what this club needs. Perhaps an increase in emotion will help keep the level of focus or aggression up. Maybe it’s just a lack of concentration at times. Whatever is causing it, it needs to be fixed and the veterans on this club need to instill that into everyone around them. Josh Suggs is one of the guys that need to be more vocal and show more leadership. The same could be said for Chris Wehan. These are two guys who can instill confidence in the club and the be a driving force in increasing creativity and pushing chances into the box. Against a side that relies so heavily on the goalkeeper, putting pressure on him will force him into mistakes.

Romario Williams – United’s most recent signing has looked impressive in his limited minutes so far since joining the club. He provided a spark in both of his appearances and showed off his ability to hold the ball up. If he can play physical and control the ball in the hold up against Miami, Williams could be a generator in and around the area for United.