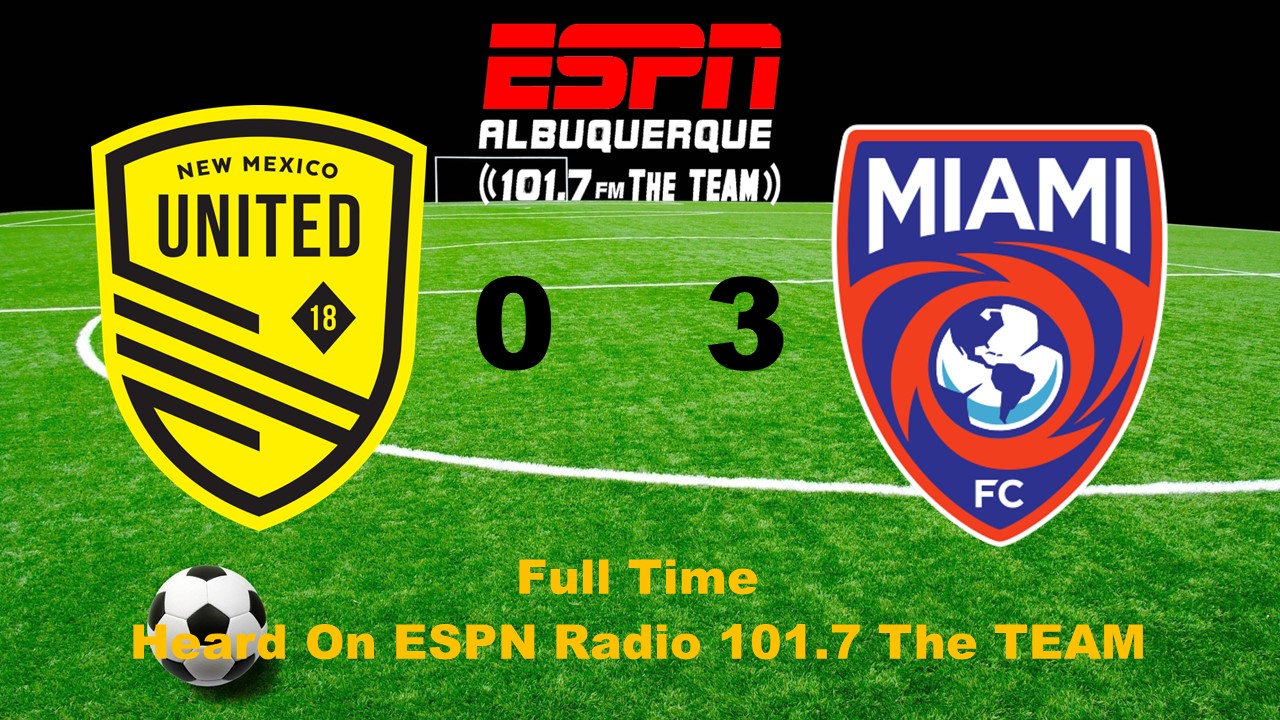 Stats lie. New Mexico United earned the lion’s share of the possession against The Miami FC on Saturday night and outshot the visitors 21 to 9. But none of that mattered in the grand scheme of things. United couldn’t buy a goal after hitting the woodwork four times and Miami capitalized on mistakes by the host. Those two things combined made for an awful night at The Lab.

United came out strong once again, dominating the early possession and looking dangerous in the attack. The ball movement was fluid and kept Miami out of shape. Things were looking promising until the match came to a halt in the 17th minute. Jostling with Kyle Murphy in the midfield, Justin Portillo was dragged to the ground, his head slamming against the pitch, rendering him unconscious. It took the referee over 20 seconds, and a failed attempt by Portillo to stand up, before the referee even thought to signal for the trainer to come onto the pitch. Visibly shaken and unsteady on his own, Portillo was eventually helped off of the pitch and removed from the match under the new concussion protocol.

The new concussion protocol allows a club to substitute a player who needs to be evaluated for a possible concussion without it counting against the five allowed subs for the match. Will Seymore came on to replace Justin who was reported as being responsive after the match.

When play finally resumed, United picked up where they left off and continued pushing for the opener. Against the run of play, however, it was the visitors who struck first. In the third minute of stoppage time, Sam Hamilton gave the ball away inside the defensive half, opening up an opportunity for Miami to close out the remaining minutes with the lead. Devon Williams caused the turnover and squared the ball to Florian Valot on the left, drawing Rashid Tetteh out of position. As Tetteh tried to close down on Valot, the ball was sent back to Williams, who looked wider left and found an unmarked Joaquin Rivas. With Tetteh pushed up the pitch, Kalen Ryden and Alexis Souahy attempted to rotate and pick up the gap, but Rivas crossed the ball ahead of the defenders and into the feet of Murphy for the tap in.

The final minute of stoppage time nearly saw Romario Williams put United on level terms, but his header ricocheted off of the crossbar and was cleared by Miami.

As has been the case for much of the season, United came out flat to start the second half. Despite the appearance of Amando Moreno, the club looked uninspired as play resumed. Just four minutes in, Murphy would find his brace. After United was unable to wrest control of the ball away after a series of headers, the combination of Williams, Valot, and Murphy proved decisive again. In possession, Valot drove towards the middle of the box and drew the attention of all three United centre-halves. Ryden, Tetteh, and Souahy all converged on the forward and left Murphy unmarked. Alex Tambakis came off of his line to the left of goal to meet Murphy, but the forward’s shot made it past Tambakis and into the back of the net.

Down by two, United finally seemed to wake up when Neco Brett, Tabort-Etaka Preston, and Josh Suggs all made their way into the match. The pace of the three subs began to create havoc in the attacking half of the pitch. To their credit, Miami did a good job of maintaining its shape while surrendering 14 shots to the hosts. Just when it seemed like things couldn’t get any worse for United, Ryden made another terrible mistake.

In the 79th, a long ball from Callum Chapman-Page looked as though it would be easily dealt with by the veteran defender. Facing goal, he inexplicably played a pass for Tambakis that was out of his reach. At the same time, bearing down on Ryden from behind came former United forward Romeo Parkes. Seeing the errant pass, Parkes sprang into action and dribbled around Tambakis before easily depositing the ball into the empty net.

Kyle Murphy – Murphy had a stellar night as he helped lead his side to a seemingly easy three-goal victory over New Mexico. The forward put three shots on target, notched two goals, and created another chance for his side.

New Mexico United return to action on Saturday, August 14 when they travel to California once again. This time out, they’ll meet LA Galaxy II for the first time this season. That match is scheduled to kickoff at 6 p.m. (MST) from Dignity Health Sports Park.