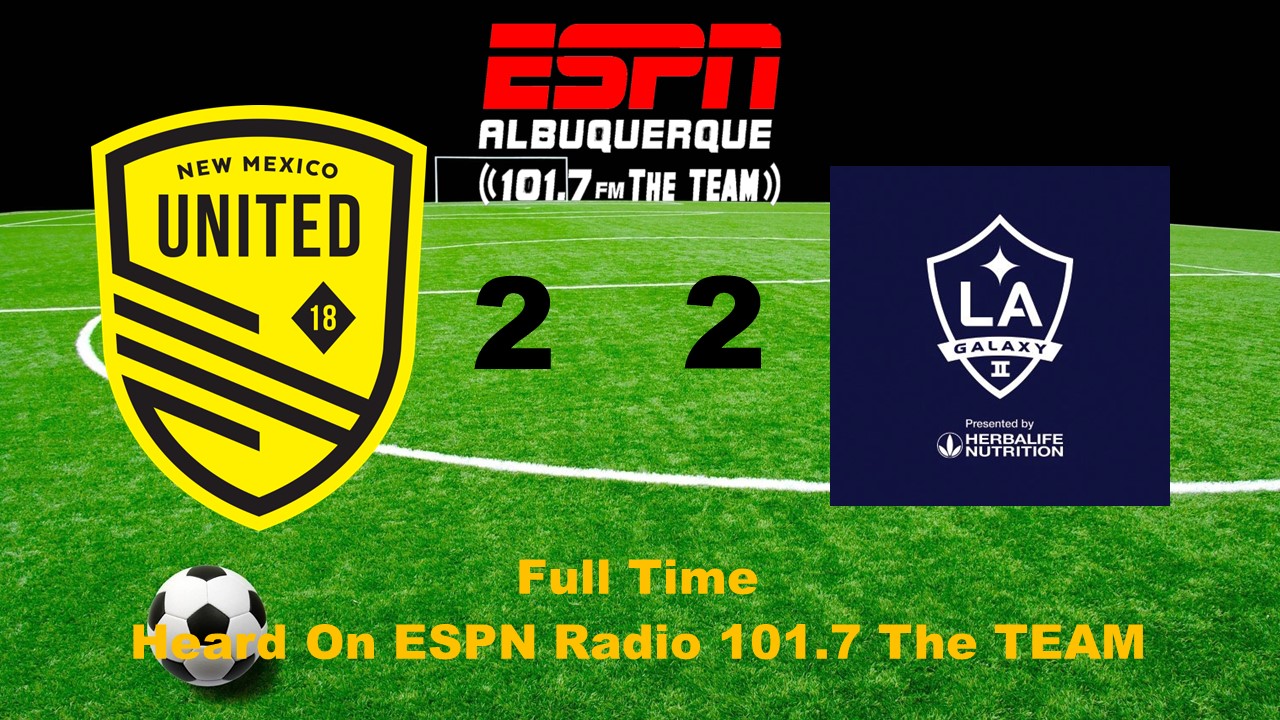 New Mexico United continued to be one of the most inconsistent clubs in the Western Conference on Sunday after failing to close out a match in which they held a two-goal lead at halftime. Thus continues the story of United’s season.

The first half was essentially an even match between the two sides, with most of the measurables even between the two clubs. United did get the better of the opportunities on goal, but was hard pressed to take advantage of them. That remained the case until the 24th minute. After several attempts to work down either sideline, United finally broke through the pressure on the left when Josh Suggs drove into the final third before playing the ball into the area for Chris Wehan. Continuing the run forward, Wehan drove to the byline before finding an opening to pass the ball back to Romario Williams. It took two attempts, but Williams found the back of the net for the match opener and his first for the club.

Cristian Nava also returned to the pitch for the first time in several weeks and after taking some time to feel his way into the match, he decided to just outplay the Galaxy defenders. Nearing halftime, Nava found his way into the box, and before crossing the byline, he attempted a cross back to the middle of the area. The ball was blocked and sent back his way where he drilled a second attempt. The latter was threatening enough that Owen Lamb stuck out a boot to try and stop it, but ended up sending the ball into his own net.

As is custom for United, they fell apart for around ten minutes and surrendered the lead they had built. Just after the hour mark Adrian Gonzalez drove down the right wing, pulling Kalen Ryden out to try and cover him on the rotation. In doing so, that left Harry Swartz and Will Seymore to cover the middle. Gonzalez lifted a cross into the area and over the head of Seymore. Behind him, Swartz wasn’t able to interfere with Cameron Dunbar, who was left to get a free header into the top right corner to cut the lead to one goal.

Los Dos would follow that up with another attempt just minutes later. This time Jonathan Perez drove towards the right side of the area, again targeting Ryden. A run in behind by Michael Salazar forced Ryden into making a decision to either step out and challenge Perez or continue tracking Salazar. Ryden attempted the former and stuck out a leg to try and block the shot by Perez, but he was unable to get a touch to the ball. The attempt curled its way around Ryden and off the inside of the woodwork on the far side to pull the hosts level.

If not for the heroics of Ford Parker in the closing minutes of the match, United may have ended up losing any hope of picking up a point on the road. Instead, Parker made a pair of terrific saves to keep the score level at two goals a piece.

Ford Parker – Despite giving up two goals, neither of which Ford had much chance of getting to, the young keeper had a decent outing. After finishing the night strong, he was able to salvage a point for United as the hunt for the playoffs continues.

Once again, United has a chance to return home for a pair of matches this week to face off against Memphis 901 and Monterey Bay FC. On Wednesday, United plays host to Memphis 901 for the first time ever with crucial playoff points on the line. After being unable to take advantage of favorable results from around the conference, United is needing a strong finish in the final ten matches in order to secure a playoff spot.