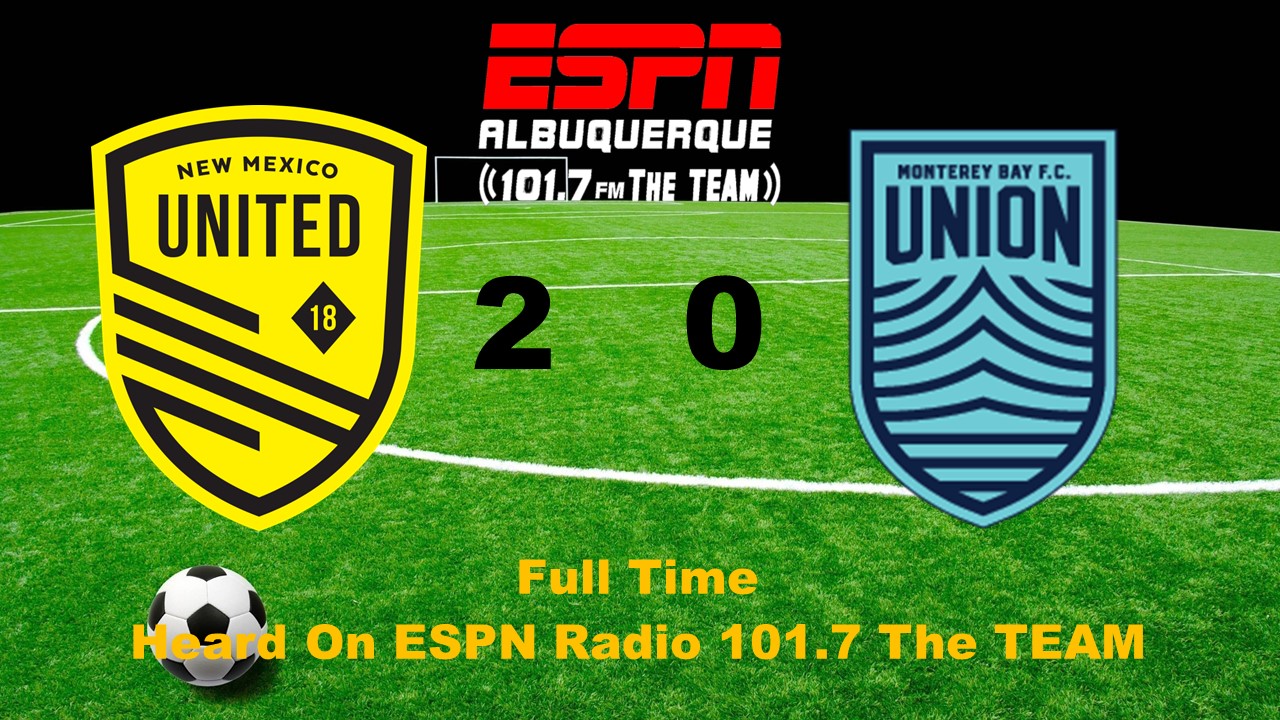 For the first time since July 6, New Mexico United picked up a win at The Lab. It was a much-needed win for the Black & Yellow having been winless so far in the month of August.

United looked to Amando Moreno early and often during the match trying to find a way to get the El Salvador international involved. United showed a mix of playing direct and trying to build out of the back in the opening minutes. Going for route one football seemed to work well against a Monterey Bay FC side that likes to play defensive. Moreno was able to get in behind on multiple runs but couldn’t find the opener.

The hosts were clearly the aggressors throughout the first half of the match as they continued to press forward. In the 36th, Moreno drew a foul nineteen yards away from goal. Once the referee settled the players and the wall was set, none other than Chris Wehan stood over the ball ready for the take. Bending the ball around the wall, Wehan’s attempt kissed the bottom edge of the crossbar before shaking the net. The goal was the first for United since August 14 and the first at home since August 3. It was also Wehan’s 39th for the club in all competitions.

Less than two minutes later The Lab would erupt again. After the match restarted Monterey gave the ball away in the defensive half immediately. Tabort-Etaka Preston took advantage of a poor pass from the visitors and drove the ball toward goal. Preston opted to take the shot himself and while it looked as though it would have been on frame no matter what, the ball deflect off of the leg of a Monterey player and away from the movement of the keeper. Caught flat-footed, the ball found the back of the net.

Going up 2-0 at the break, all United had to do was close out the night with a strong second half. Having just given up a two-goal lead against LA Galaxy II, the supporters knew that it might be a lot to ask of this club. Without employing the high press that is typically seen from United, they did a much better job of making sure the fullbacks didn’t get caught too far upfield.

Moreno looked to have his first since returning from the ACL injury during the 62nd, but it wasn’t meant to be. In a sequence started by a backheel from Kevaughn Frater, Daniel Bruce picked up the ball and sped toward goal. Joining him in the attack, creating a 4v1 scenario for United were Wehan, Frater, and Moreno at the far side. Wehan was ahead of the ball and Bruce appeared to have Moreno onside out to his left and curled a pass around Wehan. Moreno neatly slotted home, but the AR raised his flag and called Wehan offside.

Although Monterey looked better after the break, they couldn’t find an opening to try and cut the deficit. After managing only eight shots, and none on target, for the entire night the visitors couldn’t do enough to break down the defense of the Black & Yellow. United put together their most complete performance in a month’s time and walked away with three points as a result of the 2-0 victory.

Tabort-Etaka Preston – Preston looked hungry all match long and his pace caused plenty of issues for the visitors. Preston picked up a goal and showed the United faithful what he could do.

United is back in action on Saturday night in Colorado when they take on the Switchbacks for the first time this season. That match is set to kickoff at 7:00 p.m. (MST).