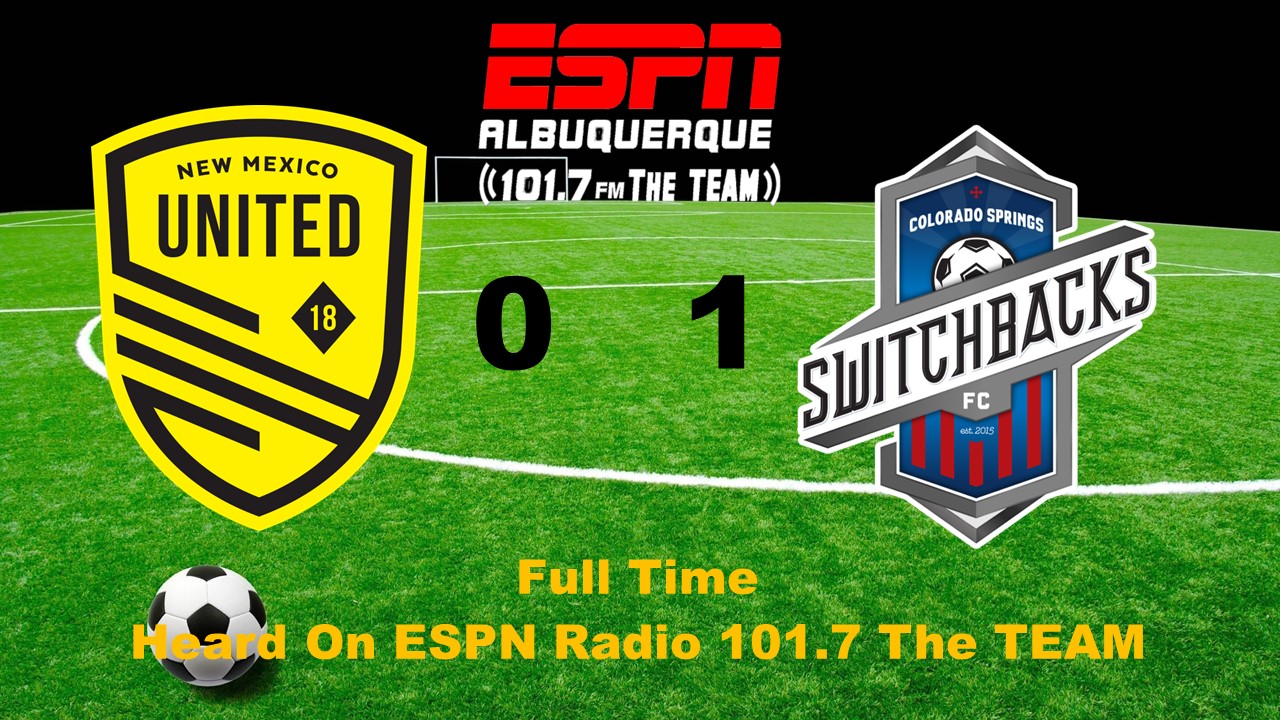 On a night that New Mexico United could have continued to close the gap on a home playoff match, the club struggled to put together a cohesive attack before falling to Colorado Springs Switchbacks FC by a final of 1-0.

Just when it looked like United may have figured some things out against Monterey Bay FC in the previous outing, the performance against the Switchbacks could be described as lackluster at best. With two defensive midfielders starting for Head Coach and Technical Director Zach Prince, it was obvious what the game plan was going into the night. Prince was content to have his side sit back while trying to absorb any pressure from a Switchbacks side that is full of pace. To his credit, with few exceptions, the tactical decision seemed to work well for United for around thirty minutes.

Colorado, who was coming off of a win over Tampa Bay, gladly took what United was giving them. While Hadji Barry was the primary target in the final third, the hosts varied their attacking angles and entrances into the danger area. Spreading the ball to the wide areas of the pitch, they were looking to pull United out of their defensive shape, but the hosts had a hard time accomplishing that.

Unable to find the back of the net from the wide position, the Switchbacks changed their plan of attack and began looking for more through balls or getting into the area via route one football. It was in the 39th that Colorado was finally able to take advantage of the midfield issues of United. Jairo Henriquez took possession of the ball just inside of his own half and went to move laterally across the field. Seeing that he had Raddy Ovouka as his shadow, with no support, he turned toward the center circle and after picking up a few feet of space sent the ball over the top for Barry.

Barry was able to pick up the ball in stride as he pushed into the box. Cutting back to his right, Barry made Kalen Ryden lose his footing before curling a shot into the right side netting for the opener.

Down a goal on the road, there was hope that perhaps Prince would make aggressive changes at the half and push for at least an equalizer. At the break, Prince decided to send on Rashid Tetteh and Tabort-Etaka Preston to in turn handle the pace from Barry better and add to the attacking options. Despite the changes, United couldn’t find an equalizer and would only attempt four shots the entire match.

Hadji Barry – The outcome of the match was decided in the first half after Barry put the ball past Alex Tambakis. Barry was a nuisance for United all night long, even with the improved pace coverage in the second half. Barry was undeniably the best player on the pitch on the night.

After the loss, New Mexico United now sits just six points clear of the playoff line. They do return home for a Friday night showdown against the enigmatic El Paso Locomotive FC. El Paso picked up a win over Phoenix Rising FC on Saturday night and will be looking to further make a dent in the race for the playoffs against United. That match is scheduled for 7 p.m. on Friday, September 2 at The Lab.