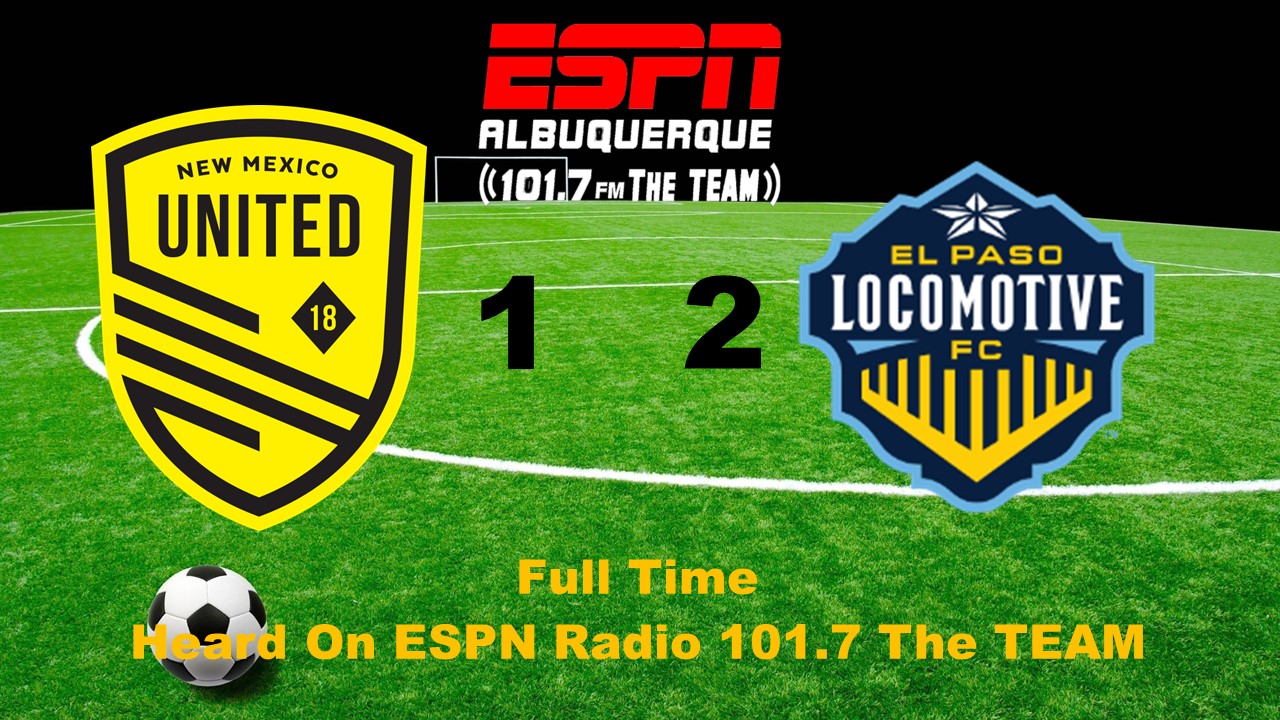 This is what the Derby del Camino Real should feel like. In front of 10,721 supporters at The Lab, New Mexico United and El Paso Locomotive FC filled the Albuquerque night with all the drama and tension anyone could have wanted before ending the night with the visitors escaping with a 2-1 win over United.

There was no slow build of action between the rivals. From the beginning, the ball quickly made its way around the pitch with United trying to be the aggressor. Within ten minutes United had three attempts on goal, but two of them were waved off for close offside flags. That was a good sign for the hosts, however. Zach Prince’s side was showing and would continue to show, aggression and fluidity that had been lacking for several weeks. The interplay between the midfield and the forwards was very encouraging.

Although United looked to be the better of the two sides early on, it would be El Paso that picked up the opening goal of the match. In a sequence that felt against the run of play, El Paso sent the ball over the top looking for Ricardo Zacarias in the right channel. Bringing the ball down, Zacarias squared it to Luis Solignac inside the area. Though the was covered by Kalen Ryden, the forward was able to put the ball past both the defender and Alex Tambakis to take the lead.

Down a goal, United didn’t take their foot off the gas as they’ve been prone to do in the past. In the 22nd, it was Kevaughn Frater that found the equalizer. Amando Moreno’s through ball found Frater inside the area as he was driving toward the left post. Nearing the line, the Jamaican turned and put a left-footed shot into the left netting to pull level, 1-1.

As always, the Derby became a chippy affair with plenty of fouls and multiple scuffles between the two clubs. Yuma, of course, was in the middle of the action and though his play didn’t have an impact on the outcome of the match, his gamesmanship did.

Questionable refereeing decisions aside, United had work to do in the second half. Both sides continued fighting for a second goal, one that would never come for the Black & Yellow. Instead, it was Solignac who found a brace and the winning goal for the visitors. With some space on the right side of the pitch, Solignac worked his way open and took down a cross from Eder Borelli at the edge of the area. Continuing his run, Solignac shot across his body and snuck the ball past Tambakis to pick up the winning goal.

Raddy Ovouka – Ovouka had a standout performance against Locomotive FC. He was dynamic on the ball, both creating chances and beating defenders on the dribble. Defensively he also had a very good night, breaking up multiple El Paso attacking opportunities.

With the loss, United remains in fifth in the Western Conference, but the margin of error becomes much smaller. Next on the schedule is a trip to Rio Grande Valley FC. The two sides will face off on Saturday, September 10.