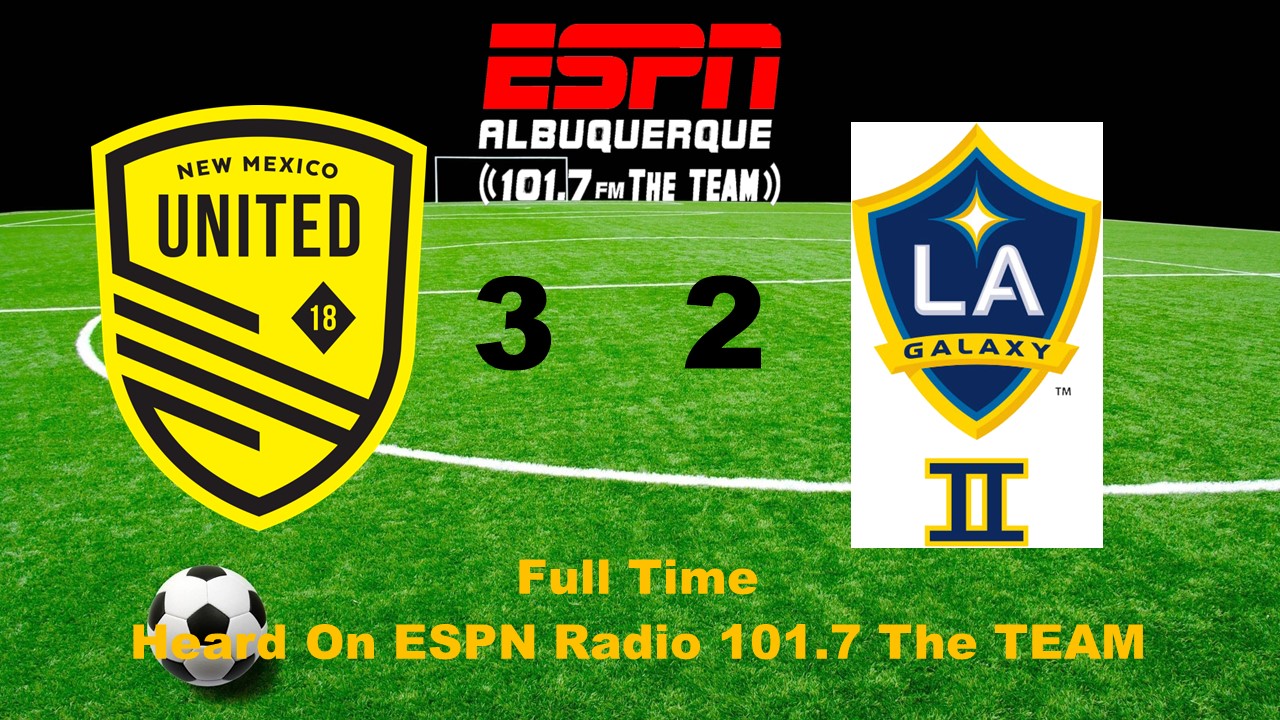 It wasn’t how New Mexico United, Zach Prince, or any of the supporters drew it up, but the Black & Yellow are back in the playoffs. After falling behind early due, United was powered back by Harry Swartz on the way to a 3-2 win at The Lab.

The match’s opening minutes turned out to be disastrous for United after they conceded an own goal in only the sixth minute of play. After Galaxy keeper Eric Lopez cleared the ball from his area, the descent landed at the feet of Kalen Ryden. With another Galaxy player closing in on him, Ryden made the decision to pass the ball back to Alex Tambakis. Tambakis appeared to be in a position to take the pass easily but somehow allowed the ball to go under his foot and into the goal.

From there it became the Harry Swartz show for United. In the 12th minute, Swartz drove down the third base side of the pitch and near the box’s outer edge. He sent in a booming cross that went off the extended arm of Liam Doyle. Penalty awarded, Justin Portillo was once again called upon. Lopez dove to his left, guessing the correct direction, but the attempt had too much pace for the keeper to stop the shot.

Back on level terms, United looked the better of the two sides on the pitch. It came as a surprise when Galaxy then notched their second goal of the evening, retaking the lead in the thirty-first minute. Going down the left side of the pitch, Joshua Drack and Michael Salazar were able to slide between the United defenders. Drack found Salazar in space between Ryden and Josh Suggs. It wasn’t much space, but it was all Salazar needed to slot home.

After the break, it was United’s turn to find a second goal. The return of Amando Moreno paid off on Sunday and again tonight as he partnered with Swartz to square the match. As Swartz drove the center of the pitch, Moreno worked his way to the edge of the area. With a nifty one-two between the duo, Swartz played the ball to Moreno before cutting back to his right. During that cut, Moreno returned the ball and Swartz shook the net from nineteen yards out.

Swartz wasn’t done there. He continued to carry the club throughout the second half and minutes after getting his first goal of the evening, he put in what would be the deciding goal. Portillo sent in a free kick from near the left field foul pole that was initially parried away by Lopez. The parry caromed off the pitch and directly to Swartz. On the half-volley, Swartz hit the ball up near his head and into the back of the net for the winning goal, 3-2.

Harry Swartz – Swartz was magic on the pitch tonight and carried the club on his shoulders. Two goals, two additional chances created, and just pure effort all night long.

United has one match remaining in the regular season and they still have a shot at a home playoff match. If United can come away from the match on Saturday against Colorado Springs with a win and if Sacramento loses, then United will get to host a playoff match for the first time ever. The match on Saturday is set to kickoff at 7:00 p.m. (MST) from The Lab.