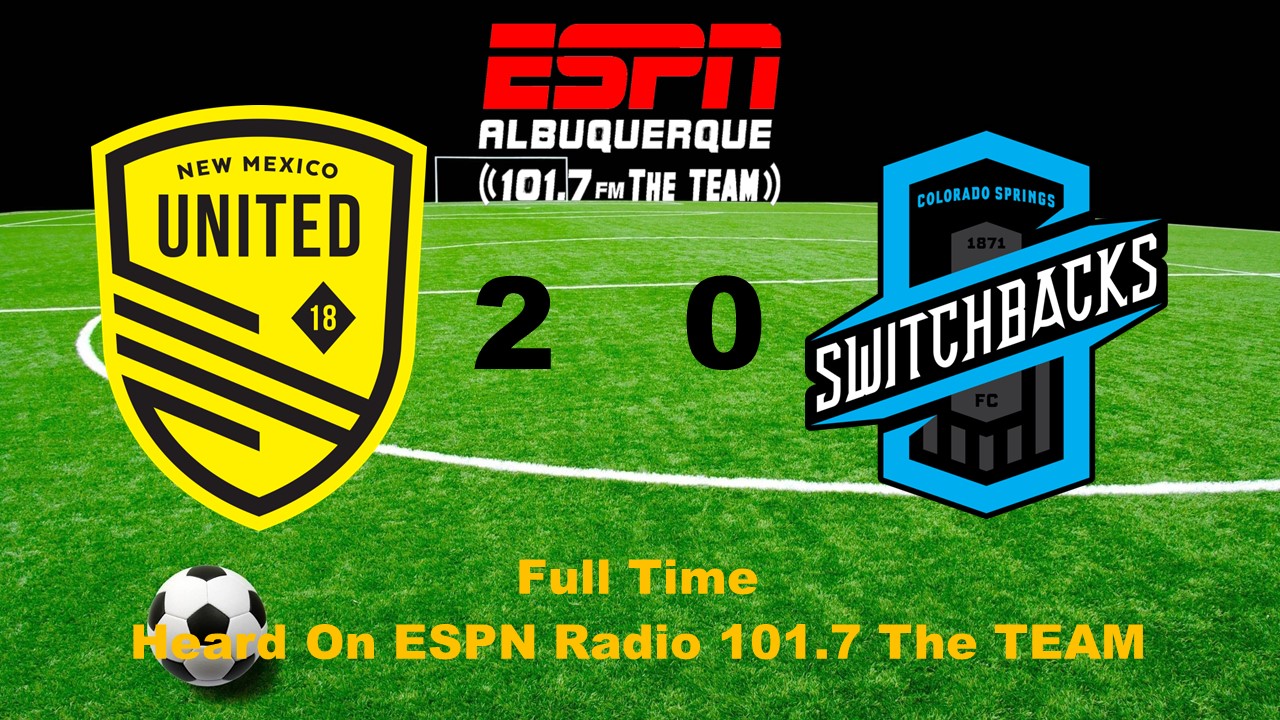 New Mexico United needed a win against Colorado Switchbacks FC to keep their hopes of hosting a playoff match alive. They certainly did their part by securing a 2-0 win in front of the biggest crowd since 2019.

There was a different energy about the team sheet with several of the stars from earlier this week not featured. Zach Prince also decided that Cristian Nava was fit to return from his leg injury earlier this season, a decision that looked brilliant in the first half. Nava’s energy has always caused issues for United’s opponents and tonight was no different.

Nava’s tendency to take on individuals bigger than him has always endeared him to the supporters. In the 21st minute, he took on two players by himself. Kalen Ryden delivered a beautiful ball over the top and Nava was able to bring it down while fending off Triston Hodge and Jeff Caldwell. Getting around the two members of the Switchbacks left the young forward with an open goal. At the last second, Matthew Mahoney tried to slide in, but Nava put the ball past him to put United on top.

Also getting a surprise start was Daniel Bruce. Having not seen the pitch much in recent weeks, his inclusion seemed to be an interesting choice. Bruce did what he does every time he touches the pitch, which is to make plays. He forced Switchbacks defenders into making poor decisions and even found his way into the box just before the half was done.

Will Seymore had a chance with the ball at his feet to do some damage from the top of the box. Instead of shooting, he put a perfect pass into the feet of Bruce near the spot. Cam Lindley tried to stop the attack by pulling Bruce to the ground, but he kept his feet under him. As he was falling down, Bruce lashed out with his left and scorched the ball into the back of the net to double the lead.

As the night grew long, the feistiness of the players increased and the referee appeared to start losing control of the match. The introduction of Aaron Wheeler was the best decision of the night by Brendan Burke. Wheeler put himself in a position to potentially pull a goal back multiple times, but they couldn’t find the finisher.

Alex Tambakis and Kalen Ryden led the defense to their eighth clean sheet of the season in their best performance since Las Vegas. With the win, United is guaranteed to finish in at least fifth in the Western Conference.

Kalen Ryden – Ryden had one of his best performances of the year. He was solid at the back and made plays coming out to the wide areas as well. Though the was only credited with one tackle, the veteran made far more plays than that for the Black & Yellow.

United is guaranteed at least the fifth seed in the West. That could change depending on the outcome of other matches, but United will either host Sacramento in the first round of the playoffs or travel to Sacramento. That match will take place sometime on October 21-23.