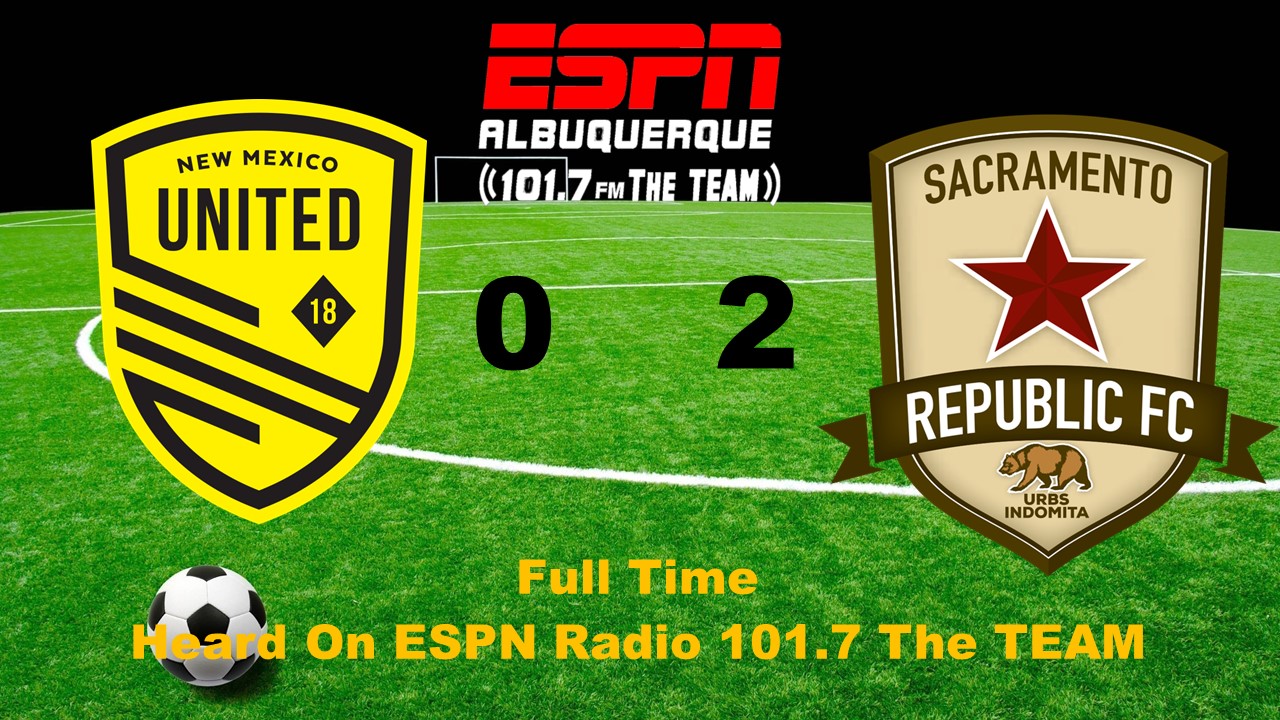 New Mexico United’s return to the playoffs was nothing more than brief. In their trip to Sacramento, nothing seemed to go right during their 2-0 loss and elimination from the USL Championship Playoffs.

The evening started brightly enough for United as they forced several Republic turnovers inside their defensive half. Those turnovers led to chances for United, but as has been the case all season, their finishing let them down. Both Jerome Kiesewetter and Amando Moreno had ugly misses from promising positions before the seventh minute.

Though the play on the pitch wasn’t stellar by United, they continued to have moments of opportunity to take the lead. Moreno and Kiesewetter had a chance to counter in the 40th after Republic failed to convert on a set piece. Moreno was dragged back by a Republic defender before playing the ball ahead to Kiesewetter. Nearing the box, the striker slowed allowing Republic to get back in a better position as he looked to cross the ball. His attempt was ultimately deflected, and the attack was stymied.

United did manage to win a corner from the progression of play, but Republic cleared the danger and avoided having two fouls called against them in the area at the same time.

With ninety seconds remaining before the end of regulation in the half, Sergio Rivas laced a shot toward goal that seemed promising. His attempt took a deflection off of the arm of defender Duke Lacroix, but the center referee stayed his whistle.

Rivas and Harry Swartz would both get an attempt before the break, the former seemingly garnering another possible handball, while the latter was just wide of goal.

The break came and went with no changes to the team sheet from either side. On the pitch, however, the momentum changed in a hurry. Maalique Foster put the hosts ahead just over a minute after play resumed. United’s defenders were caught pushed too high up the pitch, allowing Foster the chance to easily get in behind. Played in by Rodrigo Lopez, all Foster had to do was outpace Alexis Souahy. In doing so, he went one-on-one with Alex Tambakis who couldn’t get a hand on the shot as it sailed into the net.

Leading 1-0, Sacramento had all the momentum it would need to close out the night. They continually pushed a high line and began forcing mistakes out of United in their own half. Unable to string together any sort of meaningful possession for much of the second half, United ceded control of the night. Costly turnovers allowed Republic chances like United had seen in the first half, but the hosts were able to actually look dangerous with them.

The final nail in United’s coffin would come after another turnover in the defensive half, this one by Souahy. As he attempted to play the ball forward, he instead only found the feet of Jack Gurr. Two passes later, Keko fired from twenty-five yards away, trying for the far post. Mid-flight the ball took a deflection off the head, and potentially arm, of Luther Archimede. The deflected ball ended up in the back of the net, doubling the lead for Republic.

Rodrigo Lopez – Although he didn’t add to his goals tally for the year, Lopez notched two more assists and five chances created against United. His stellar season for Republic continues and he will be a handful for whoever they face next.

With the loss, United’s 2022 season comes to a disappointing end. In the coming days and weeks, the club will likely be announcing the first roster moves of the off-season as they begin to look forward to 2023.